Learn about the life and times of Scottish-born immigrant James Reid (1909–1987), who turned a head injury during the Second World War into a creative gift. Learning the craft of needlepoint in occupational therapy, Reid eventually returned to Canmore where he was raised, and began to produce large needlepoint canvasses of his own design. These exceptional works—two of which are in Calgary’s Glenbow Museum’s collection and eight were recently donated to the Canmore Museum—depict some of the Bow Valley’s classic mountain peaks. Join art curator and historian Mary-Beth Laviolette and former Glenbow textile conservator and Canmore resident Gail Niinimaa for this online presentation about Reid and his remarkable woven universe. 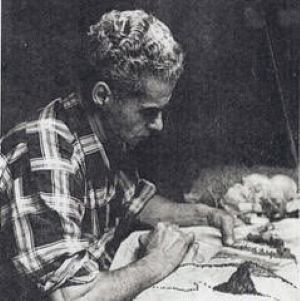 James Douglas Reid (Jimmy) was born on June 17th, 1909, in Bothswellhaugh, Scotland. Jimmy’s father came to Canada in 1910 and found work in the coal mines of the Crow’s Nest Pass in Alberta. The family, with 3-year-old Jimmy and four sisters followed in 1912. In 1916, when the CPR began coaling its main-line locomotives from the Canmore mines, the family moved to Canmore.

In the 1920s and 30s, Arthur 0. Wheeler established Wheeler’s Walking Tours in Banff and guided guests on one-hundred-and-fifty-mile hiking tours in the mountains.  He started using tent shelters at Mt Assiniboine and Jimmy supplied the camp with a small train of pack horses. In the late 1930s, he left Alberta and went to work as an engineer in the Hollinger Gold Mine in Timmins, Ontario.  In 1939, he married Eunice Elaine McKinnon from Canmore in Ontario and they had three children, James (Jamie), Douglas and Robert. He enlisted with the Royal Canadian Engineers in 1942 and  was sent to Italy as a lietenant and army engineer.

Jimmy was horribly aflicted by his service during the Second World War; he came home early following a medical breakdown during the Allied Campaign in Italy.  He returned to receiv care at the Colonel Belcher Hospital in Calgary and to rejoin his wife and young family and his mother and three sisters in Canmore, Banff and Blackie.  Jimmy never fully recovered from the war and turned to craft and needlepoint as a way to cope with PTSD.   The concentraton on work and art had the power to calm and stabilize his troubled mind.  10 of his works are now in the collections of the Glenbow Museum; another 8 now reside in the collections of the Canmore Museum. 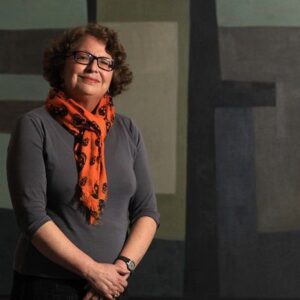 Mary-Beth Laviolette, is an avid hiker and independent art writer and curator based in Canmore, Alberta, who specializes in Albertan and Western Canadian art. She is the author of A Delicate Art: Artists, Wildflowers and Native Plants of the West and An Alberta Art Chronicle: Adventures in Recent & Contemporary Art, 1970–2000, and co-author of Alberta Art & Artists: A Survey. Recent exhibitions she has curated include Reckonings: Michael Cameron & Karen Maiolo (Whyte Museum of the Canadian Rockies, Banff); Pulse: Alberta Society of Artists at 80 Years (Triangle Gallery of Visual Arts, Calgary) and Alberta Mistresses of the Modern: 1935 to 1975 (Art Gallery of Alberta, Edmonton). Mary-Beth is also a public speaker and enjoys engaging with the public about art whenever and wherever possible. Mary-Beth serves as the Canmore Museum’s Associate Curator of Art. 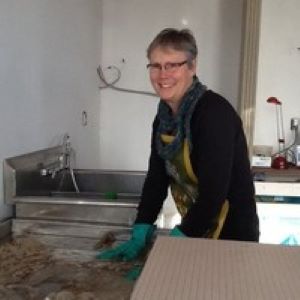 Gail Niinimaa is an independent textile conservator based in Canmore, Alberta whose expansive career spans continents. After graduating from the University of Alberta with a Bachelor of Science in Home Economics, Gail travelled to England, Switzerland, and Denmark where she honed her skills apprenticing in labs there. She was hired by the Glenbow Museum in 1979 where she has been a major contributor to their textile collection. Requiring much patience and an eye for detail, Gail is sought after for her expertise, pragmatism, and the professional approach she applies to her work.  Gail has previously conserved a work by Reid in the Glenbow Museum art collection; the Canmore Museum is applying for funds for Gail to conserve the works which have been donated to the Canmore Museum for future exhibition.

NATURE + CLIMATE + COMMUNITY SERIES: WHAT'S IT LIKE TO OWN A ZEV?

STORIES OF CANMORE BOOK CLUB: LAWRENCE GRASSI - FROM PIEDMONT TO THE ROCKY MOUNTAINS