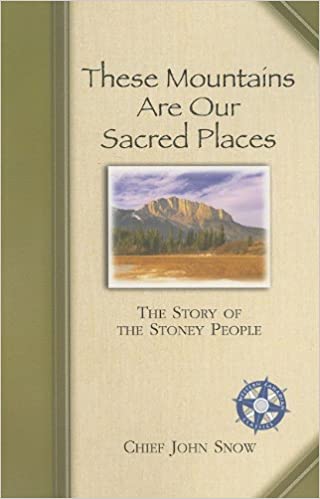 These Mountains Are Our Sacred Spaces: the Story of the Stoney People

First published in 1977 to coincide with the hundredth anniversary of the signing of historical Treaty Seven by the First Nations of southern Alberta and the Canadian government, These Mountains Are Our Sacred Places has become a classic of Western Canadian literature.

These Mountains Are Our Sacred Places is a result of extensive research. After consulting archival records and the Stoney oral tradition, Chief John Snow describes with clarity, depth, and understanding the Native perspective on life since the birth of Treaty Seven in 1877.

With compassion and detail, Snow describes the stable state of First Nations prior to contact with Europeans and the destruction wrought by the whisky traders. He records the period of treaty-signing and the failure on the government’s part to hold to treaty agreements. And most importantly, Snow explains his people’s feeling of dispossession that continues to threaten the very survival of Stoney beliefs, values, and lifestyle.

In his wisdom, however, Snow is also optimistic: about the hope that was born after the introduction of self-government in 1969, following the granting of citizenship to Indian people across the nation; and about his people’s belief in biculturalism as they seek a path that allows them to thrive and benefit from both Native and non-Native cultures, rather than slip between the two.

In an epilogue written in 2005, Chief John Snow reflects upon his career since the Treaty Seven commemoration in 1977, describing some of the events that affected First Nations at the end of the twentieth century and, also, discussing more personal, philosophical issues, such as cultural revitalization, Native spirituality, and the beauty of the oral tradition.